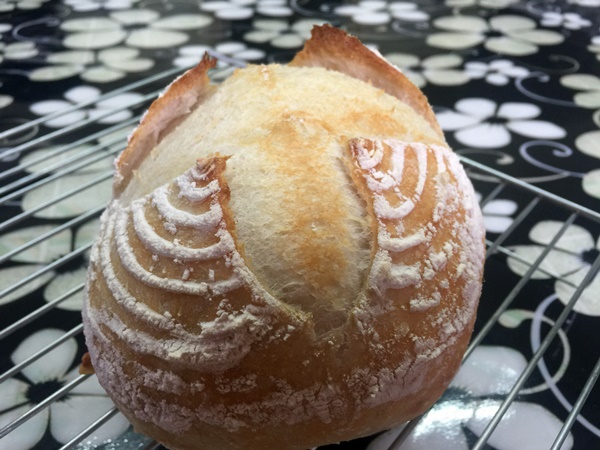 I was planning a trip to Malta.  My friend and I would stay in apartments most of the time and certainly we would cook simple stuff.  He is a German and loves bread.  As I saw oven in the photos of the apartments, I had the idea of baking bread in the flat.  No kneading machine, of course.  To make it possible to have homemade bread, the only solution was no kneading bread.  I saw this recipe in one of the Chinese sites.  The lady is from Taiwan.  She and her German husband live in Germany, a country of the best bread. As the German husband was happy with the no kneading bread, it gave me some confidence.  I tested it and below are the results on the different days and finally in Malta. 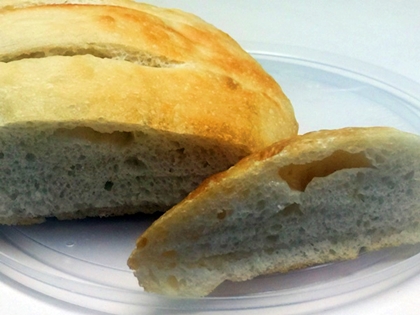 I prepared the dough and got one part for baking on three different days. The first trial on 22 April 2017.  It was good and with much bubbles.

The next day, the dough was put on a preheated baking pan.  Steam was added.  The crust was nice and chewy.

It was the nicest on the third day.  I did not know if it was the longer time of development or the different scoring method.

Above is the deliverable in Valletta, Malta. It was nice on its own and with butter, orange marmalade or maple butter.  We had a good day.

Below is the recipe translated into English.

Prepare a jar/basin with a cover.  Mix the ingredients below:

Let the dough go on fermentation at room temperature for 2 hours.

Put the dough in the fridge overnight.

Grease hands with olive oil.  Take out a desired portion and slightly shape it.  Let it rise for 30 minutes.  The recipe says flour instead of oil.  But I prefer to handle the wet dough with oil instead.

Fill a baking tray with hot water and produce steam at the bottom of the oven.As

Place another baking tray on the upper part of the oven.  Preheat the oven at 230C.

WordPress.com is the best place for your personal blog or business site.